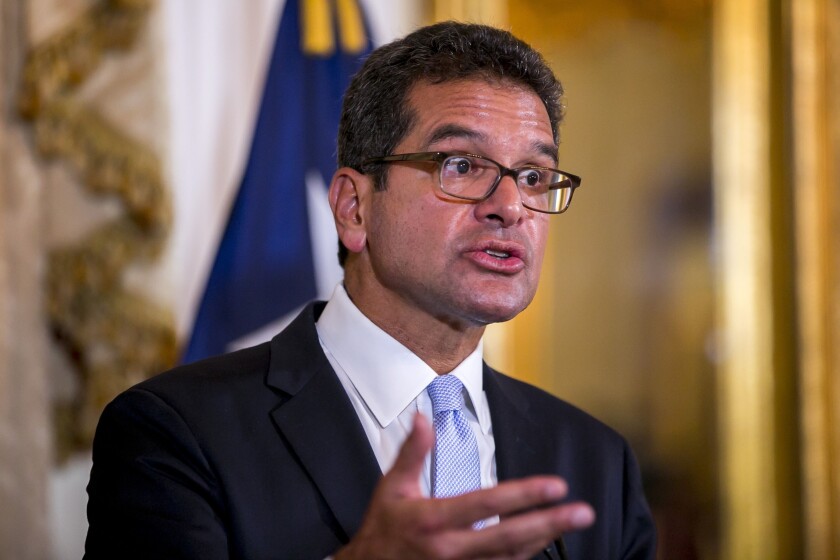 Puerto Rico’s path to statehood remains muddled because of differences among key members of Congress on how to resolve the territory’s political status.

That was highlighted at a Wednesday afternoon hearing by the House Natural Resources Committee that didn’t resolve the conflict between two competing bills that lay out different paths to follow.

Chairman Raul Grijalva, D-Ariz., ended the hearing promising further study of the issue, saying it “is going to require I think some level of deliberation and consensus.”

Grijalva said he also is hoping that the Biden administration will weigh in soon. “The last four years, there was nothing definitive coming from the previous administration,” he said.

Meanwhile, another House committee advanced statehood admissions legislation for the District of Columbia earlier the same day, teeing that bill up for a floor vote next week.

Statehood for D.C. faces universal Republican opposition while statehood for Puerto Rico has support among at least some Republicans.

The D.C. Statehood Admissions Act passed the House last year, but without a single Republican in support and never got a vote in the Republican-controlled Senate.

Democratic Rep. Jamie Raskin of Maryland suggested Wednesday that a bipartisan compromise might be to pair D.C. and Puerto Rico statehood admissions into one bill.

The problem with Puerto Rico statehood is division among the ranks of Democrats.

Seventy-three House Democats are cosponsors of the Puerto Rico Self-Determination Act of 2021, H.R. 2070, authored by Democratic Rep. Nydia Velazquez of New York which calls for residents to elect delegates to a Constitutional Status Convention. The delegates would decide which self-governance option residents prefer, including independence from the United States.

None of the cosponsors of the Velazquez bill are Republicans, although the Senate version of the bill is co-sponsored by Sen. Roger Wicker, R-Miss., and Sen. Robert Menendez, D-N.J.

If Puerto Rico were a state, it would have two U.S. senators and four House members in Congress who Pierluisi said he knows “would make a difference.” That political clout would have speeded federal emergency aid following the 2017 hurricanes and more recent earthquakes that have devastated the island, he said.

A 2014 study by the United States Government Accountability Office found that federal funding for 11 out of 29 selected federal programs it reviewed would be affected, but concluded the overall impact would be uncertain.

“Statehood’s aggregate fiscal impact would be influenced greatly by the terms of admission, strategies to promote economic development, and decisions regarding Puerto Rico’s revenue structure,” the GAO said. “One factor that may have facilitated Puerto Rico’s ability to issue debt is that the interest on most bonds issued by Puerto Rico’s government, its political subdivisions, and its public corporations generally is not subject to income tax at the federal, state, or local levels, GAO said.

“Under statehood, if Puerto Rico was treated like the states, its government-issued debt would no longer enjoy this so called triple-exemption, as income accruing to residents of other states would become taxable at the state and/or local levels,” the report said. “The loss of triple-exempt bond status could result in reduced demand for Puerto Rico’s debt.”

Pierliusi, on the other hand, described the statehood admissions bill as “self-executing legislation that sets the terms for admission including passage of a final referendum.”

“It does not force statehood,” the governor said, describing the other legislation as proposing a “convoluted’’ process that is far from self-determination.

Supporters of statehood point to a referendum last November in which voters said “yes” to statehood by 52%.

However, that same election produced new anti-statehood majorities in both the Puerto Rico House of Representatives and the Senate, testified Aníbal Acevedo-Vilá, who served as governor of Puerto Rico from 2005 to 2009. He said a majority of the island’s mayors also oppose statehood.

The self-determination bill has a significant base of supporters.

Rafael Hernández, the speaker of the Puerto Rico House of Representatives, testified that he supports that approach.

Columbia University law professor Christina D. Ponsa-Kraus, a native of Puerto Rico, said recent Supreme Court decisions made made it clear that Puerto Rico remains a U.S. territory under the Constitution even though it has the status of a commonwealth. She criticized the self-determination bill as “gratuitous and dilatory.” It would send Puerto Rico back to the drawing board for a debate that residents already have been having for 70 years, she said.