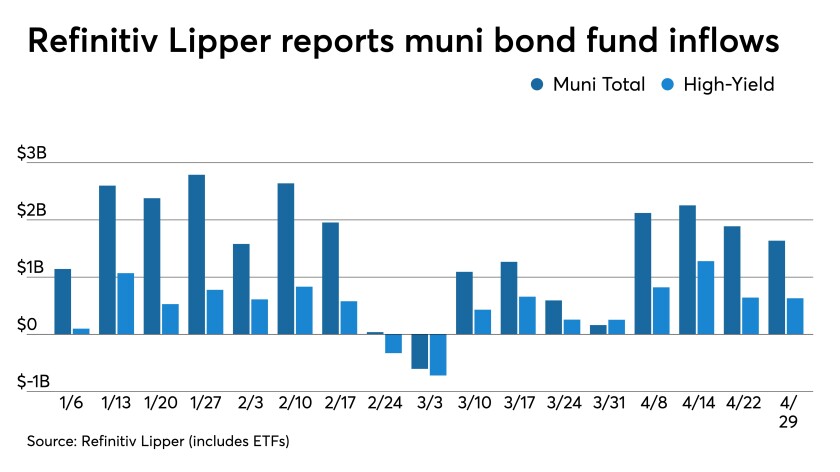 Munis lost ground Thursday with two to four basis point cuts to triple-A benchmark yields after U.S. Treasuries weakened with better economic data pouring in as the month closes out.

Cash flowed into municipal bond mutual funds again at $1.64 billion with high-yield making up $630 million of it, as investors fearing rising taxes. Fund flows continue to prop up this corner of the market, helping to keep municipal yields still at historically low levels, but some resistance is emerging.

The municipal 10-year lost ground this week and edged closer toward 1% — 0.99% on both Refinitiv MMD and ICE Data Services — with investors showing a hesitancy to accept sub-1% yields. The 10-year was above 1% from late-February until the third week of April when it dipped below the threshold.

“I think it is a bit of month-end position squaring and buyers are showing a hesitancy to step through 1% in and around 10 years once again,” said Refinitiv MMD Managing Analyst Greg Saulnier.

Gilt-edged Massachusetts Clean Water Trust met investors’ demand with a 1.03% on its 10-year with a 5% coupon, in line with retail scales, while it repriced with one to four basis point cuts in other maturities.

With rather large redemptions coming in the next couple of months, and supply expected to increase to help offset that, plus “rich muni/UST ratios, more government spending, and inflation on the rise … I think the story points to slightly higher yields for the moment,” he said.

CreditSights noted earlier in the week that the summer redemption season is fast approaching — issuers will be paying out $116 billion of principal from maturing and callable bonds in June-August. The average amount of monthly redemptions for this year is $27 billion but for the first three months of summer, that figure rises to $39 billion. May redemptions will be $25.7 billion, below average, but 21% more than April, CreditSights’ Patrick Luby said.

A few large competitive general obligation deals are popping up on the calendar for next week, including $1 billion-plus GOs from Pennsylvania, $600 million from Massachusetts and a $144.8 million deal from Seattle.

Heavier supply evened out by redemptions should still keep levels in a tight range and some analysts and traders pointed to credit as the real impetus for these levels.

“Credit is improving and you cannot ignore that as an investor and just demand the yield you want,” a New York trader said. “Moody’s moved the entire transit sector to stable; airports are getting boosted; New Jersey sold at plus-80, a 40-basis-point tightening from last year. The improving credit picture is really creating a difficult time to be a muni investor looking for yield, but a great time to be an issuer.”

Refinitiv Lipper reports $1.64B inflow
In the week ended April 28, weekly reporting tax-exempt mutual funds saw $1.637 billion of inflows. It followed an inflow of $1.889 billion in the previous week.

The four-week moving average remained positive at $1.976 billion, after being in the green at $1.607 billion in the previous week.

Fed will dismiss GDP gains for now
The surge in gross domestic product in the first quarter “doesn’t mean anything” to the Federal Reserve yet, but if the economy continues to accelerate, it could force the central bank to start to remove accommodation before 2023, analysts said.

GDP climbed 6.4% in the first quarter on a seasonally adjusted annual basis, according to the advance estimate released Thursday. In the fourth quarter of 2020, GDP gained 4.3%.

Economists surveyed by IFR Markets had expected a gain of 6.5%.

“I don’t think today’s report means anything for the Fed,” given that it was near projections, said Hank Smith, director and head of investment strategy at Haverford Trust. “That is crystal clear from yesterday’s Federal Open Market Committee meeting.”

After the meeting, the Fed statement noted the economic improvement, but stated it wanted to see full recovery before removing support. “At least in the near term (the next six to nine months) regardless of economic numbers,” he said, “the Fed is on autopilot.”

Personal consumption expenditures rose 3.5% in the first quarter, following a gain of 1.5% in Q4. Core PCE, which excludes food and energy, increased 2.3%, on the heels of a 1.3% rise in the prior quarter.

“Only time will tell if we are at the beginning of a wage price spiral, similar to what we saw in the second half of the 1970s and into the 1980s,” Haverford’s Smith said. “I do not believe that is where we are headed.”

While wage inflation is likely, he said, “the macro forces that have kept inflation low for the past 25 years, are still in place. Globalization or the oversupply of labor worldwide, technology and demographics aren’t going away in the next year.” Smith made similar comments in a recent Bond Buyer podcast.

The first quarter could be the “weakest quarter of the year,” and if that is the case, he said, the Fed will have to “back off the bond buying,” and alter their stance “that there will be no hikes till 2023.”

With consumption spurring growth in the quarter, Smith said, the increase in the number of people being vaccinated “is creating confidence and thus consumers are able to unleash pent up demand.”

And that demand will increase as “mega economies, like New York and California, fully reopen, he added.

Jay Bryson, chief economist at Wells Fargo Securities, agreed, “real GDP growth will remain robust,” because of the unleashing of “pent-up demand for many services and the mountain of excess savings that many households have accumulated. Indeed, 2021 likely will be the strongest year for U.S. real GDP growth in nearly 40 years.”

Separately, initial jobless claims fell to a pandemic low of 553,000 on a seasonally adjusted annual basis in the week ended April 24 from an upwardly revised 566,000 a week earlier, first reported as 547,000.

Economists expected 560,000 claims in the week.

Continued claims increased to 3.660 million in the week ended April 17 from a downwardly revised 3.651 million a week earlier, initially reported as 3.674 million.

The labor market recovery, he noted, has been “stubbornly slow” and seems to “take one step back,” with every “two steps forward.”

In other data released Thursday, pending home sales gained 1.9% in March, less than the 6.0% gain economists expected, but the first rise in three months.

Chip Barnett contributed to this report.