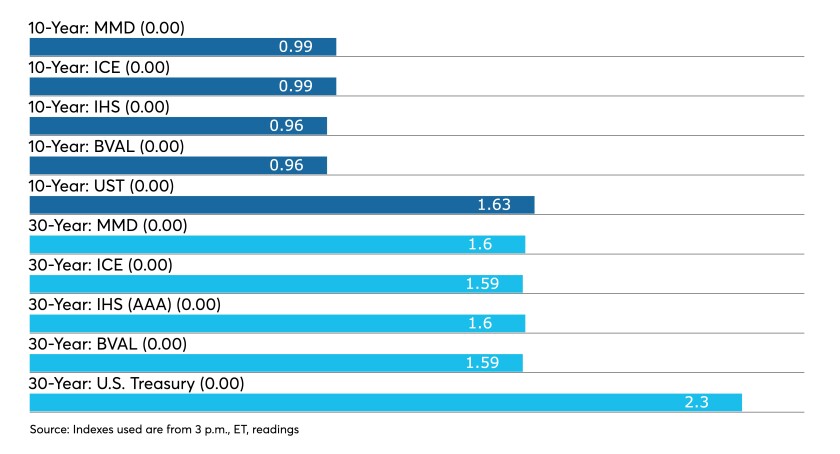 Municipals ended the week and the month quietly as participants prepare for a supply and redemption increase in May, but even with some pressure felt this week, tailwinds remain for the market.

Rates rose this week by as much as six basis points on the 10-year, but on Friday, the benchmark remained below 1%. Given the rally earlier in the month and that participants began digesting federal aid, credit improvements and potential tax hikes, April ended on solid footing.

“Although tax-exempt valuations are clearly far from attractive, we do not expect any substantial muni correction … . Even if rates sell off further, tax-exempts will likely follow, but should outperform, supported by a combination of low supply, strong inflows, heavy bond redemptions over the course of the summer; large cash cushions of mutual funds; and improving credit quality of municipal bonds,” according to Barclays PLC in a Friday report.

“In the current environment ratios and relative valuations versus Treasuries simply matter a lot less, in our view. Any muni dips will likely be bought, thus will likely be short-lived,” wrote Barclays strategists Mikhail Foux, Clare Pickering and Mayur Patel.

Barclays noted that if yields do continue moving up, one part of the tax-exempt space might become more vulnerable: low-coupon bonds, “which are already trading very rich versus their high-coupon counterparts, as investors are looking to add extra yield to their portfolios.”

They believe that higher taxes on capital gains for incomes above $1 million would negatively affect bonds trading below par, as their accretion to par will be taxed at a much higher rate. This could lead to issues needing higher coupons, especially out long to make up for the difference.

“Due to tax filing considerations in play and month-end balancing, rates met some resistance in recent sessions and broad indices will finish out April shy of a 1% return,” she said.

“That isn’t to say demand has waned — rather it’s moved from a hectic pace to a more measured one where not only spread matters but also actual rates. What this month has brought is a new paradigm for what constitutes ‘spread.’ Partly due to improving economics in many muni sectors that were more severely affected during the start of lockdowns and also a function of the absolute rate range, spread now has a new meaning.”

That meaning, she said, is shown through looking at a year ago to now.

Following the month-long selloff last March/April, intermediate yields settled around 1.50% and low single-As and BBBs traded above 3% (a BBB-plus Arkansas hospital new issue priced in May 2020 brought 5s due 2030 at 3.02%).

“Limited availability of down-in-credit names is creating a catch-22 with more inquiry chasing less float,” she said. “Returns are showing the demand: the BBB category has more than 200 basis points excess gain against the broad market this year.”

Next week’s calendar does little in the way of providing yield. New issuance grows to $9.9 billion for the week of May 3-7, up from $3.47 billion this week.

Income report: nothing to see here
The recently distributed $1,400 stimulus checks helped March personal income and spending soar, suggesting it will be months before economists get an accurate read and can determine whether inflation will persist.

The year-over-year price indexes “will rise significantly further in April, reflecting their monthly declines of 0.5% and 0.4% in April 2020,” noted Mickey Levy, Berenberg chief economist for the U.S., Americas and Asia. PCE could grow 3% and the core about 2.5%, he said. “Although these sharp spikes will dissipate, we anticipate the robust growth in aggregate demand will support more sustained inflation pressures.”

But the Federal Reserve has basically said it expects these temporary inflation gains and will discount them.

“The personal income and spending data was all about the effects of the stimulus checks,” said Ed Moya, senior market analyst, at OANDA. “Personal income will obviously decline over the next couple of months, so that means we will have to wait until deep into the summer to get an accurate reading.”

Food and oil prices were the largest reason for the increase in prices, he added. “Inflation is picking up but it is still too early to make the argument if it is transitory.”

Levy said next month’s numbers, which will suggest inflation above 2%, “will draw more attention to the issue of whether the rise in inflation is temporary or the beginning of a sustained upward trend.”

And while the Fed will discount these numbers, “there is growing evidence that inflation is heating up now with business and consumer expectations moving higher and supply chain problems persisting amid an expected boom in consumer demand,” write Wells Fargo senior economist Tim Quinlian and economist Shannon Seery. “That said, it’s too soon to know if current price pressure is the effects of the reopening that may soon subside or will in fact lead to sustained higher price growth past the sharp bounce in activity.”

Separately, the Chicago Business Barometer gained to 72.1 in April — its highest reading since December 1983 — from 66.3 in March.

Economists expected a reading of 65.5.

The new orders index gained to its best level in almost seven years, while the production index climbed to its highest since January 2018, and the orders backlog index soared to levels not seen since December 1973.

Elsewhere, the University of Michigan consumer sentiment index gained to 88.3 in the final April read from 84.9 in March. The index stood at 71.8 in April 2020.

Economists estimated a reading of 87.5.

Also released Friday, the employment cost index climbed 0.9% in the first three months of the year after a 0.7% the prior quarter, wages and salaries rose 1.0% after a 0.8% increase a quarter before, and benefits costs gained 0.6% after rising 0.6% in the prior three-month period.

Economists anticipated the index would rise 0.7%.

“Overall compensation growth is essentially flat compared with pre-crisis levels,” Grant Thornton’s Swonk said. “Gains were concentrated in wages and salaries and in one sector of the economy: the financial services sector, where the pace of wage gains more than doubled on a year-over-year basis.”

She added, “That is one of many reasons that the Federal Reserve remains optimistic that any flare in inflation we experience will not become entrenched; we don’t have the wage gains to support a sustained rise in prices.”

The Port Authority of New York and New Jersey is set to sell $187 million of consolidated bonds at 10:45 a.m.

On Wednesday, Pennsylvania (Aa3//AA-/) is set to sell $1.04 billion of tax-exempt and taxable general obligation bonds at 11 a.m.

The California Infrastructure and Economic Development Bank (A2///) is set to price $281.4 million of California Academy of Sciences index mode sustainability revenue bonds on Wednesday. Series 2018A, Series 2018B, Series 2018C and Series 2018D remarketing. Wells Fargo Securities is bookrunner.

The School Board of Palm Beach County, Florida, (Aa3//AA-/) is set to price $112.9 million of tax-exempt and taxable certificates of participation. J.P. Morgan Securities LLC is lead underwriter.