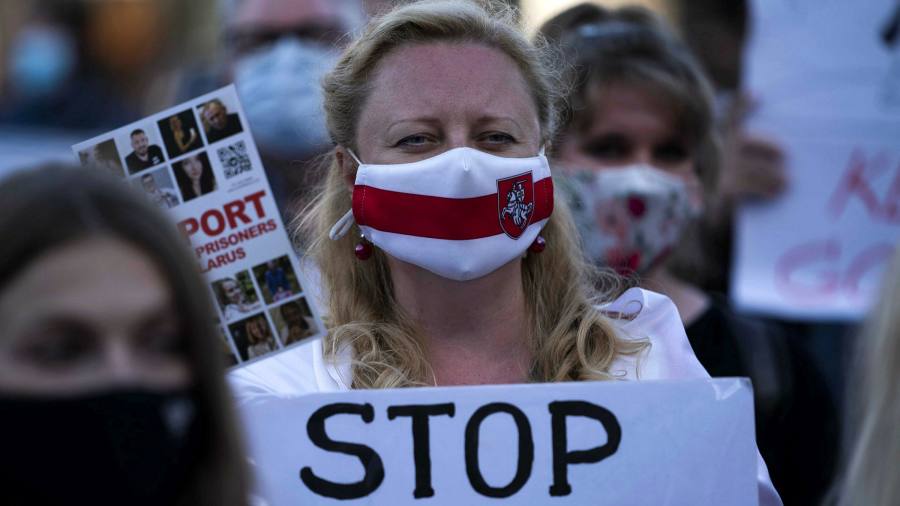 The US has moved to punish Belarus for the forced landing of a Ryanair flight last weekend by announcing that it would reimpose sanctions on nine of the country’s state-owned companies and would join the EU in developing a list of additional targets.

In a statement late on Friday, Jen Psaki, the White House press secretary, said Washington was taking the steps “together with our partners and allies, to hold the regime accountable for its actions and to demonstrate our commitment to the aspirations of the people of Belarus”.

On Sunday Belarusian authorities diverted a Ryanair jet travelling between Greece and Lithuania to Minsk so they could detain a dissident on board.

The brazen move triggered a wave of condemnation from the west against president Alexander Lukashenko’s government, which is closely allied with Russia and its president Vladimir Putin, and quick action by the EU to punish Belarus. The US was slower to respond but on Friday it began to take action.

Psaki said that as of June 3, the US would reimpose “full blocking sanctions” against nine state-owned companies from Belarus that had previously been granted sanctions relief from the US Treasury department.

In addition, the White House press secretary said the US was “developing a list of targeted sanctions against key members” of the regime in Belarus that were “associated with ongoing abuses of human rights and corruption, the falsification of the 2020 election and the events of May 23”.

Psaki added that the Treasury department would also prepare an executive order for President Joe Biden to sign that authorises US “authorities to impose sanctions on elements” of the regime in Belarus as well as “its support network, and those that support corruption, the abuse of human rights and attacks on democracy”.

The crackdown from Washington also includes a warning from the US Department of State for US citizens to avoid travelling to Belarus, and a notice for American passenger airlines to “exercise extreme caution when considering flying in Belarusian airspace” — though this appeared to fall short of an outright ban.

Early this week the EU agreed to expand sanctions against Belarus and ban its state airline from the bloc’s airports in response to the intercepted flight. Brussels also called for the immediate release of Roman Protasevich, a leading activist, and his partner, Sofia Sapega, who were detained after the Ryanair flight was forced to land in Minsk.

Washington’s move could complicate the lead-up to a summit between Biden and Putin to be held in Geneva in mid-June in an effort by the two countries to patch up relations that have rapidly deteriorated in recent months.