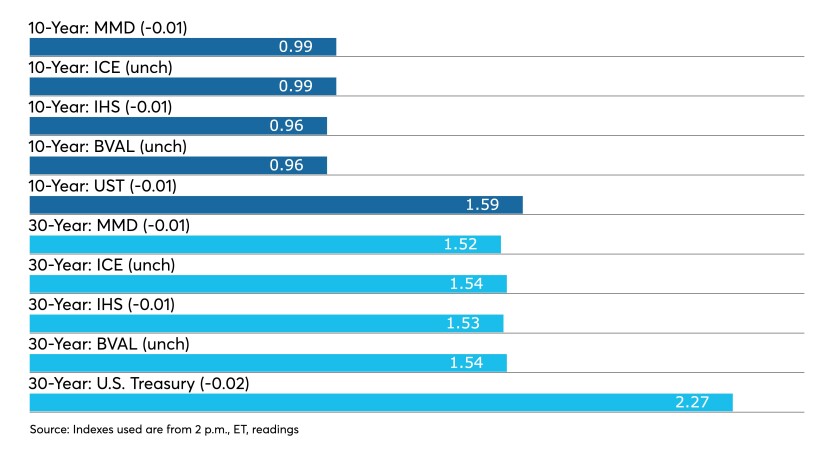 Municipals were a touch firmer Friday with a few stronger high-grade prints clearing at levels to move triple-A benchmarks a basis point better while U.S. Treasuries were also a basis point or two lower ahead of what will be a low-issuance week to start the summer.

Unless there is some larger rate volatility, “muni yields will likely stay in a narrow range and trading activity remain subdued,” they said, noting secondary trading volume was $25 billion this week, lower than $27 billion from the prior week and just below the $26 billion weekly volume average for 2021.

“One of the main reasons for a large increase in the use of RRP is cash received by municipalities through the American Rescue Plan, with most ending up in short-term funding markets,” they wrote.

While only $110 billion has been doled out to state and local governments thus far, they can expect another $125 billion coming soon.

“State and local municipalities have been drawing up plans for utilization of this cash for quite some time, hence we believe they will put it to work in very short order, and the RRP’s balances will decline sooner rather than later, in our view,” according to Barclays.

Refinitiv Lipper reports that investment-grade corporate funds saw inflows drop to $911.427 million in the week ended May 26, down from $1.682 billion of inflows the week before.

But the weakness was most noteworthy in high-yield as investors continued to pull cash out of these funds.

Conversely, muni funds have had a strong month, with $1.466 billion of inflows in the latest week and high-yield muni funds seeing inflows of $813.818 million. Muni funds haven’t seen an outflow since the week of March 3, only the second time all year the funds saw outflows.

Many strategists and analysts have pointed out the outperformance munis have made versus their corporate counterparts and many expect this trend to continue along with the broader muni outperformance in fixed-income markets.

Taper talk
The Federal Reserve Bank of Kansas City announced it will hold a modified version of its Jackson Hole summit this year, and Friday’s economic data led some economists to suggest that is when the central bank will work out a plan to taper its asset purchases.

“We expect a tapering announcement in the third quarter of this year, possibly at the Jackson Hole research conference in August,” said Wilmington Trust economists Luke Tilley and Rhea Thomas. The Fed has said it wanted to see “substantial further progress” toward its dual mandates. “We believe they will deem enough progress has been made later this year.”

And while they expect inflation to be transitory, Tilley and Thomas see an upside risk on the services side, “which has historically been more stable and a dampener for overall inflation.”

Some of the labor market conditions that could make inflation in that sector persistent are: the number of jobs available; companies including Amazon and McDonald’s raising wages because they can’t attract workers, and COVID concerns and retirements, which may add to worker shortages, they said.

Diane Swonk, chief economist at Grant Thornton, agreed a framework for tapering is likely at the Jackson Hole summit.

“The Fed will be watching for moderation in inflation pressures by year-end and any signs that the surge in inflation tied to reopening the economy could be longer lasting could move up the timeline on rate hikes,” she said.

In data released Friday, personal income fell 13.1% in April after increasing a downwardly revised 20.9% in March, originally reported as a 21.1% gain, while spending rose 0.5% after an upwardly revised 4.7% climb, first reported as a 4.2% increase.

The jump in PCE was “the fastest annual increase since September 2008,” said Swonk. “And core PCE saw the fastest pace of core inflation since July 1992, but still well below the 4.2% jump in the CPI measure of inflation for the month.”

Turning back to the Fed, Morgan Stanley economists believe the Fed will be forced to raise its inflation forecast in its June Summary of Economic Projections. The core PCE projection, they say, “currently at 2.2%, is likely to be revised up to 2.4% and possibly even higher.”

Economists saw the index holding at the mid-month 82.8 level.

Separately, the Chicago Business Barometer gained to 75.2 in May — its highest reading since November 1973 — from 72.1 in April.

Economists expected a reading of 69.5.

The new orders index was the highest it’s been since December 1983, while the orders backlog index soared to levels not seen in 70 years.

Also released Friday, the Midwest Economy Index dipped to 0.61 in April from 0.62 in March and the relative MEI fell to 0.81 from 1.59. The numbers suggest the Midwest economy is growing at above-usual rates.

The Michigan State Housing Development Authority (/AA//) is set to price on Thursday $321 million of rental housing revenue bonds, Series 2021 A (non-AMT) and Series B taxables. BofA Securities is bookrunner.

Chip Barnett contributed to this report.