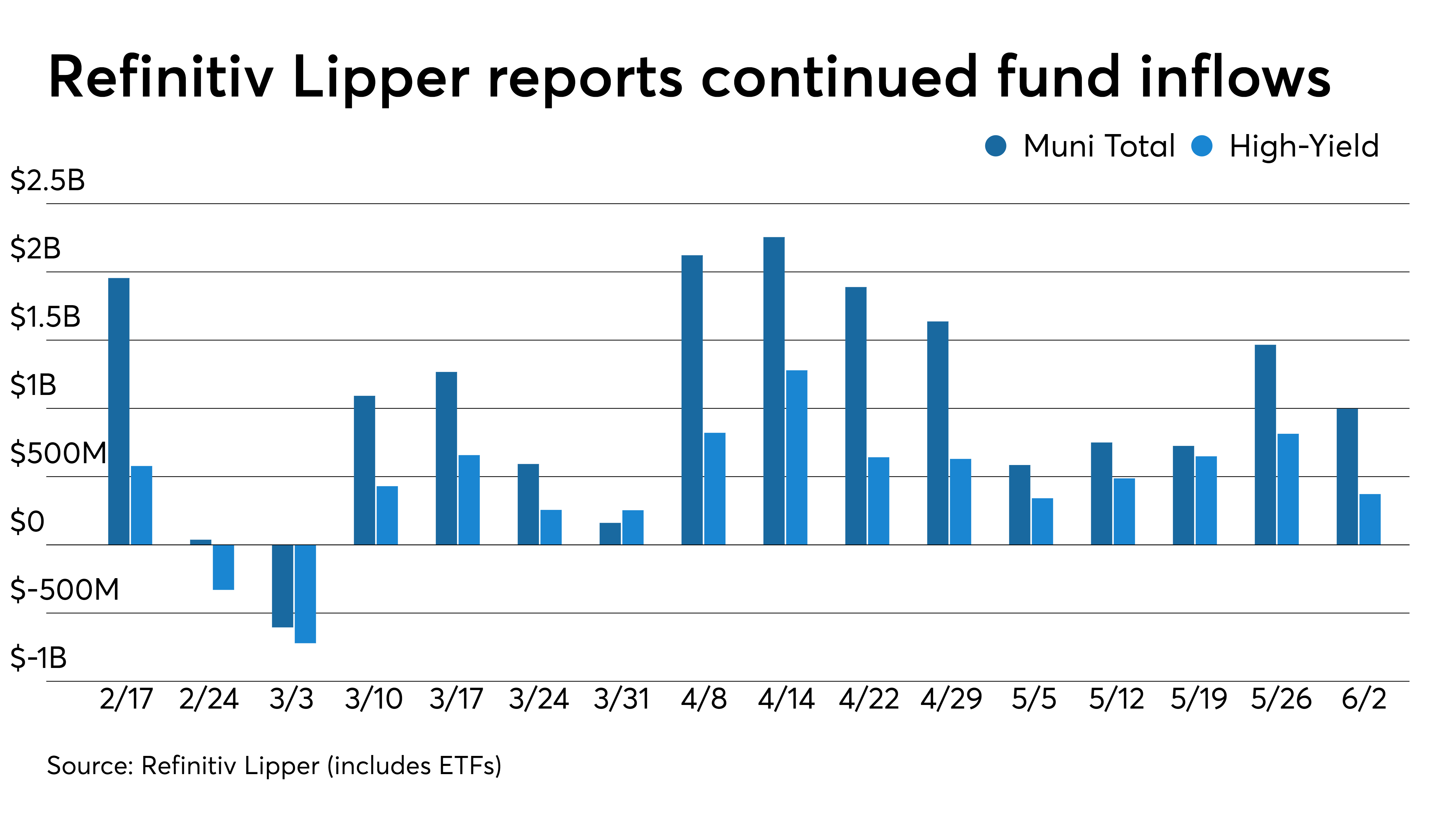 Ongoing large inflows into the municipal market sustained a firm tone Thursday as interest rates remain on a gradual decline in spite of the volatility in the Treasury market, but most participants await Friday’s jobs report.

Refinitiv Lipper reported $997.358 million of inflows into municipal bond mutual funds, of that $372 million was high-yield.

Triple-A benchmarks were steady to firmer in spots while U.S. Treasuries rose, leading municipal to UST ratios lower. The 10-year closed at 60% and at 65% in 30-years, according to Refinitiv MMD. ICE Data Services saw ratios on the 10-year at 60% and the 30-year at 67%.

“The municipal market seems to be impervious to a lot of the news regarding job data and potential inflation risk, primarily because inflows into the tax-exempt market have reached record levels and there have been substantial positive inflows for the past quarter,” Howard Mackey, managing director at NW Financial in Hoboken, N.J. said.

Much of the demand is spread across the yield curve. However Mackey said that yields on the long end of the market has come down faster than the short end.

“Demand is very strong and it’s having a positive effect on specialty states,” especially during the spring reinvestment season as demand has been heightened by the arrival of June 1 coupon and maturity payments, which have contributed to the market strength, Mackey said.

“June tends to be a fairly big month, as well as December,” he said. “I would venture to say the fact that you have the strong inflows, any coupon payments will exacerbate the demand you have because there is that much more cash to be reinvested.”

Mackey predicted that demand will continue to sustain the market firmness and improvement going forward.

“Prices will go up in a steady fashion and yields will continue to come down even more so on the long end — particularly where you have to go out on the yield curve to receive a yield of 1% or more — beyond the 10 to 12- year range,” he said.

The four-week moving average remained positive at $984.400 million, after being in the green at $881.288 million in the previous week.

Thursday’s economic data
The U.S. economy is making progress toward the Federal Reserve’s objective of full employment, as Thursday’s surge of data releases looked to be quite encouraging, according to an analyst.

“Given this, we expect the recent whispers of Fed tapering to continue with some voices likely getting louder and while we do not see action as imminent, we expect the economy to improve enough for the Fed to announce a taper before year end,” according to Scott Ruesterholz, portfolio manager at Insight Investment.

IFR Markets had anticipated 372,000 unemployment claims for the week.

“New jobless claims have sunk to a fresh pandemic low, falling for a fifth straight week,” according to Mark Hamrick, senior economic analyst at Bankrate. “The seasonally adjusted headline number is now below 400,000, which has often been seen as psychologically important during past economic downturns.”

Hamrick noted the Beige Book survey released Wednesday “was filled with accounts from business contacts indicating employers are struggling to fill open positions. In some cases, they are opting to pay workers more. In others, they are limiting hours or output in response to the lack of staffing.

“The multi trillion-dollar question is the future fate of inflation. The status of wage gains will be something to watch in the coming months as the Federal Reserve prepares to signal that it will eventually dial back on asset purchases as a prelude to a hike in interest rates, the timing of which remains uncertain,” Hamrick said.

Ruesterholz noted that employee layoffs by companies have largely normalized.

“With growing reports of labor shortages, businesses are incentivized to keep the workers they have,” Ruesterholz said.

“The ADP report was particularly strong, as we saw businesses of all sizes add over 300,000 jobs, a sign of strong, broad-based labor demand,” said Ruesterholz.

But he noted that a strong ADP report may not necessarily translate into a strong non-farm payrolls report.

“Last month, ADP reported a 750,000 job gain only for the official number [reported by the Labor Department] to come in at 266,000, which speaks to how much they can diverge.”

The Institute for Supply Management’s services PMI, climbed to a record high 64.0% in May from 62.7% in April. The old record occurred in March when the index hit 63.7%. IFR Markets expected a rise to 64.3%.

“In figures going back to the late 1990s, service sector activity has never been so strong and broadly based,” according to Tim Quinlan and Sarah House, senior economists at Wells Fargo Securities. “As the reopening of the services economy shifts into a higher gear, demand is outstripping scarce supply pushing the prices paid component to the second highest reading on record.”

Ruesterholz noted the all-time high on the PMI underlines how quickly the economy has gone from severe recession to boom.

“While longer delivery times and higher input costs are headwinds, every sector grew, a testament to the broad-based nature of the recovery,” he said.

Quinlan and House added that ongoing problems to re-staff are contributing to upward price pressures.

“Like its manufacturing counterpart and [Wednesday’s] Beige Book, comments reflected that hiring would be even stronger if businesses could find more workers,” they said.

They noted that Friday’s employment report will come with an extra degree of uncertainty.

“Demand for labor is clearly strong, as evidenced by record job openings and elevated hiring plans and a leap in consumers viewing jobs as plentiful,” they said. “But getting workers back to the jobsite as soon as businesses are ready for them remains a clear hurdle to hiring. We have pared back our expectations for [Friday’s] employment report as a result and look for an increase of 700,000 jobs.”

Also released Thursday, non-farm productivity grew at an unrevised seasonally adjusted annual rate of 5.4% in the first quarter. Unit labor costs rose a revised 1.7%, originally reported as a 0.3% dip. IFR anticipated a 5.4% rise in productivity and a 0.3% dip in unit labor costs.

“COVID-19 lockdowns have spurred a boomlet in productivity as businesses sought ways to continue to operate their businesses amid these restrictions and we learned that technological advances enabled greater virtual engagement,” Ruesterholz said.

He said the question now is whether the economy can sustain higher productivity growth as the economy reopens.

Alongside productivity gains, he noted labor costs were rising, with wages on the low-end of the spectrum gaining due somewhat to competition from enhanced unemployment benefits.

“Ultimately as these benefits lapse, schools reopen, and labor supply normalizes, these wage gains may prove to be one-time in nature rather than the beginning of a wage-hiking cycle,” he said.