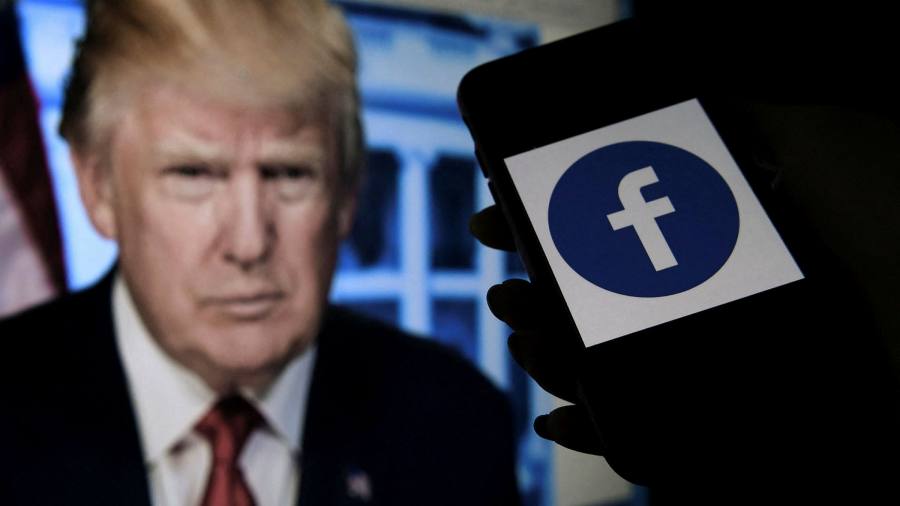 Facebook has said Donald Trump will be banned from its network for at least two years, a move likely to inflame tensions with allies of the former US president who accuse the company of censoring conservative views.

The ban was a revision from a previous indefinite suspension by Facebook, which was criticised by the company’s “oversight board”. The board last month upheld the decision to kick Trump off the platform but found fault with the lifetime ban.

The new suspension will be effective from the date of Trump’s initial suspension on January 7, the day after the attack by the ex-president’s supporters on the US Capitol building in Washington, Facebook said. The company had barred him from its platform for voicing support for the Capitol rioters. The ban will only be lifted if the company feels “the risk to public safety has receded”.

“When the suspension is eventually lifted, there will be a strict set of rapidly escalating sanctions that will be triggered if Mr Trump commits further violations in future, up to and including permanent removal of his pages and accounts,” wrote Nick Clegg, Facebook’s head of global policy, in a blog post explaining the decision on Friday.

The decision came as part of an announcement detailing broader changes to the company’s policies on how it moderates speech by influential public figures, following criticism last month from the Oversight Board that its existing approach had created “widespread confusion”.

While upholding Facebook’s decision to suspend Trump’s account, the board chastised the company for implementing an “indefinite” suspension that fell outside the company’s published policies. Calling it a “vague” and “standardless” penalty, the board referred back to Facebook the ultimate decision on whether to permanently ban the former president.

On Friday Facebook outlined its framework for dealing with inciteful public figures during “times of civil unrest and ongoing violence”, with a two-year ban being the most severe penalty.

“Given the gravity of the circumstances that led to Mr Trump’s suspension,” Clegg wrote, “we believe his actions constituted a severe violation of our rules which merit the highest penalty available under the new enforcement protocols.”

The Oversight Board said it was “reviewing” Facebook’s announcement.

White House press secretary Jen Psaki said Trump’s use of social media had revealed “a lot” during his term, adding: “Feels pretty unlikely that the zebra is going to change his stripes over the next two years.”

In a statement on Friday afternoon, Trump repeated false claims about the 2020 US presidential election, and said Facebook’s decision was an “insult” to the people who voted for him.

“They shouldn’t be allowed to get away with this censoring and silencing, and ultimately, we will win,” Trump said. “Our country can’t take this abuse any more!”

As well as clarifying the length of Trump’s ban, Facebook also shared more details about its “strikes” system for users and groups being suspended from the service. It said it would in future make it clear when questionable content by prominent figures had been left published on the platform due to its “newsworthiness” being in the public interest.

In a significant policy U-turn, Clegg said content posted by politicians would no longer be treated any differently from other users. Previously, the company had said political leaders, even when posting factually untrue comments, should as a “general rule” be “seen and heard” to enable public scrutiny.

The effectiveness of deplatforming has angered America’s conservatives, many of whom argue “Silicon Valley elites” are engaging in an unfair and unprecedented restriction of free speech. Last month Florida governor Ron DeSantis signed a sweeping bill into state law that would give Floridians the ability to sue tech companies over moderation decisions.

Two trade associations representing the technology companies have filed a lawsuit seeking to block the new law, calling it an attack on the companies’ rights under the first amendment to the US constitution.

In the wake of his Facebook ban, and because of similar action taken by Twitter, Trump launched his own blog site — From the Desk of Donald J Trump — only to shut it down just 29 days later. According to several news reports, the former president had been left frustrated by a lack of readership.

“The two-year suspension could seriously impair Trump’s efforts to remain relevant politically for 2024,” said Carl Tobias, a law professor at the University of Richmond. “And the strict rules imposed for lifting the ban, as articulated by Nick Clegg, will make it very difficult for Trump to satisfy those strictures in 2023, much less before then.”