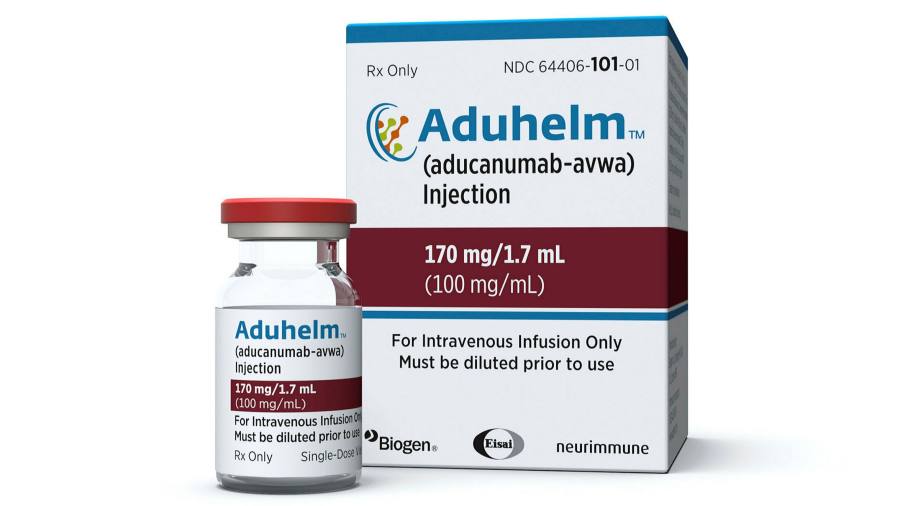 US regulators have approved the first new treatment for Alzheimer’s disease in almost two decades by giving a green light to a drug developed by Biogen despite a rancorous scientific debate over whether the medicine even works.

In a significant moment for the roughly 35m people suffering from the cognitive illness worldwide, the US Food and Drug Administration on Monday approved aducanumab, an intravenous infusion that will cost $56,000 for a yearly course.

Aducanumab, which will be sold under the brand name Aduhelm, is the first Alzheimer’s drug to be approved that purports to slow down the progression of the disease. The medicine breaks up clumps of amyloid plaques that form in the brain, which some scientists believe cause the illness.

All of the other drugs that have been approved for Alzheimer’s so far treat its symptoms rather than slowing or reversing the course of the disease.

Shares of Biogen, a Massachusetts-based biotech company, soared 53 per cent to a record $428 after trading resumed on Monday afternoon. The stock price of Japanese drugmaker Eisai, its development partner on aducanumab, surged 52 per cent.

The drug has been surrounded by controversy for years, with many scientists opposing its approval on the grounds that there is scant evidence it works.

“We are well aware of the attention surrounding this approval,” said Patrizia Cavazzoni, director of the FDA’s Center for Drug Evaluation and Research. However, she added the agency had concluded that aducanumab was “reasonably likely” to help patients and that the overall benefits of the drug outweighed the risk to patients.

The agency approved the medicine even after its own panel of scientific advisers last year strongly opposed approval, arguing that clinical trials of the medicine did not provide sufficient evidence that it works.

Cavazzoni acknowledged those disagreements but said the drug removed amyloid plaques and that the agency “expected” that this would reduce the rate of cognitive decline in people with the disease.

The drug was approved using a so-called accelerated pathway, which allows the FDA to approve a medicine for a serious illness that has few treatment options — even in advance of conclusive evidence that it is effective.

Biogen will now need to carry out a large, confirmatory trial to determine whether the drug has a clinical benefit, a process that is likely to take years. It will be allowed to market and sell aducanumab in the meantime.

Although the drug was tested on patients with mild forms of Alzheimer’s, anyone with the disease will be able to access the drug, according to its label, therefore vastly increasing Biogen’s potential revenues.

“This is a game-changer for Biogen now,” said Colin Bristow, an analyst at UBS, adding that the breadth of the eligible population “was definitely a surprise”.

Michel Vounatsos, chief executive of Biogen, said: “This historic moment is the culmination of more than a decade of groundbreaking research in the complex field of Alzheimer’s disease.”

In theory, the FDA could rescind the approval if the confirmatory trial fails or is not completed, although there are few instances of the agency pulling drugs from the market after making them available to patients.

Clinical trials of the drug have been mired in controversy. In March 2019, Biogen halted two studies after an independent committee said the drug was not going to be effective. But in October that year, the company said new analysis of a larger trial data set showed the drug worked when given at a higher dose.

The Alzheimer’s Association welcomed the decision, hailing it as a new day of hope for Alzheimer’s patients. “This approval is a victory for people living with Alzheimer’s and their families,” said Harry Johns, the charity’s president, adding that he “fully supports” the new trial.

John Hardy, professor of neuroscience at University College London, said: “While I am pleased that aducanumab has received approval, we have to be clear that, at best, this is a drug with marginal benefit which will help only very carefully selected patients.”

The FDA’s decision has ramifications for research into Alzheimer’s beyond Biogen, especially for drugmakers that have spent billions of dollars pursuing the “amyloid hypothesis” despite a string of costly failures. Shares in Eli Lilly, which is at present trialling its own amyloid-clearing drug, jumped 10 per cent.