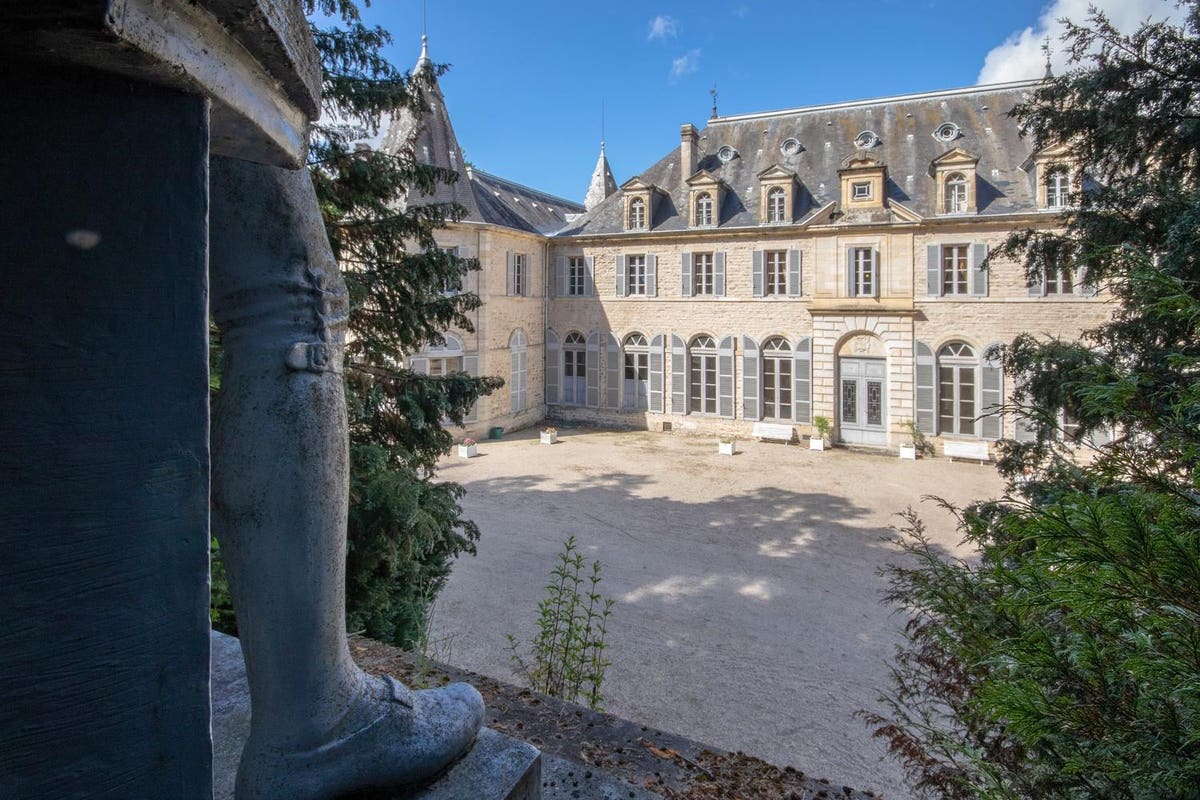 Generation after generation of one household from the village of Orléat in central France has walked the same grounds for some 400 years.

This sand-colored stone castle in the Auvergne-Rhône-Alpes region has been passed down within the family since it was built in the 17th century. Over the years, events put on by the owners have attracted a collection of esteemed guests, including writer and politician François-René de Chateaubriand, political theorist Madame de Staël and mathematician and inventor Blaise Pascal, to name a few.

But the property has yet another notable feature. The centerpiece of the 13,000-square-foot chateau is a two-story library filled with shelves housing a collection of 60,000 books. A spiral staircase connects the two levels in one corner of the wood-clad room. A book-lined gallery features inlaid wood floors and French doors.

A mansard roof and conical turrets top the two-story residence. The elegant reception rooms feature high ceilings, elaborate moldings and gracefully arched windows. Many of the 10 bedrooms are on the first floor.

A grand staircase leads to a landing before splitting in opposite directions to access the second floor.

There’s additional space in the attic, where dormer windows bring in daylight, and the basement.

Tucked at the end of a path on the wooded grounds is a neo-Romanesque chapel designated as a Monument Historique, a national heritage site.

The estate encompasses 50 hectares (about 125 acres) of forest and gardens overlooking a valley. The views also take in the Chaîne des Puys. The now dormant volcanic range contains cinder and lava domes, as well as craters.

Sophie van Cayzeele of Groupe Mercure is the listing agent for the estate, priced at EUR 1.7 million (US $2 million).

The property is about 20 minutes from the university city of Clermont-Ferrand, where sites to see include a Gothic cathedral made from black lava stone and the Place de Jaude, a broad public square centered on a statue of a war hero from Julius Caesar’s Gallic Wars. The city also has a renowned rugby team.

The chateau is approximately 10 minutes from a freeway and 70 minutes to Lyon and the international Lyon—Saint Exupéry Airport. Clermont-Ferrand Auvergne Airport is the nearest air hub.

Groupe Mercure is an exclusive member of Forbes Global Properties, a consumer marketplace and membership network of elite brokerages selling the world’s most luxurious homes.