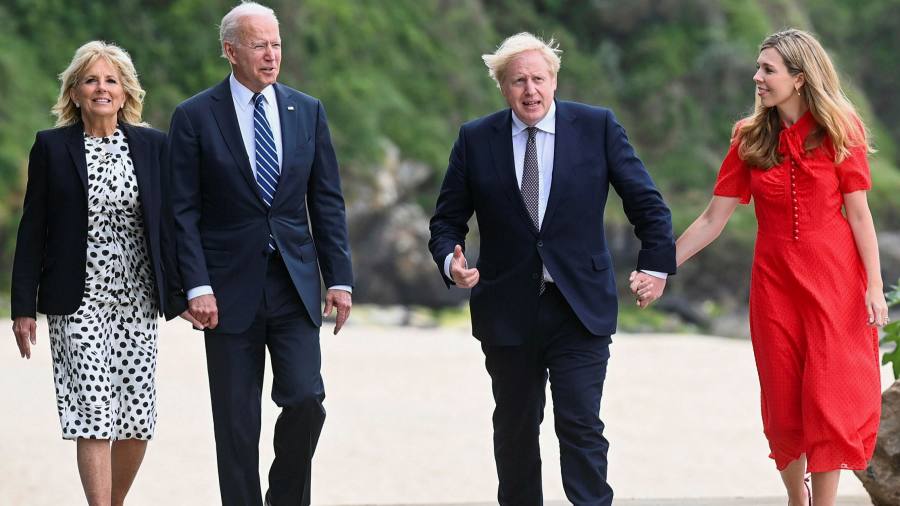 Leaders of the G7 economies convening in the UK will announce a pledge to provide 1bn coronavirus doses to poorer countries as part of a plan to “vaccinate the world” by the end of 2022.

The move, to be outlined at the start of the three-day summit on Friday, is designed to address criticism that wealthy western governments have secured the bulk of life-saving Covid-19 vaccines from manufacturers to immunise their own populations. The vow is also an attempt to counter “vaccine diplomacy” by Beijing and Moscow, which have been quick to sell their jabs to developing nations.

Hosting the G7 summit in Cornwall, Britain’s picturesque southern tip, prime minister Boris Johnson is due to announce on Friday that the UK will donate 100m surplus vaccine doses in the next 12 months, according to aides.

After a face-to-face meeting with his host in Carbis Bay, on the rural Cornish coast, US president Joe Biden on Thursday unveiled a commitment to purchase 500m Covid-19 vaccines made by BioNTech/Pfizer and donate them to some of the world’s poorest countries. This includes 200m this year and the rest in the first half of next year.

“This is about our responsibility, our humanitarian obligation to save as many lives as we can,” Biden said.

The EU has separately pledged 100m doses for African countries and other developing nations by the end of this year.

Speaking at the Elysée Palace on Thursday, French president Emmanuel Macron said he would push for the G7 to “lift obstacles” to speed up vaccination in Africa to reach a 40 per cent immunisation rate by the end of this year and 60 per cent by the end of the first quarter next year.

Jabs donated by the US and other G7 members would need to be “matched” by an additional pledge by drugmakers to give away the equivalent of 10 per cent of their dose production, Macron added.

British diplomats have called the Carbis Bay meeting a “vaccine summit”, underlining that the G7 countries would illustrate their rediscovered collective approach by tackling Covid-19.

After four years in which the club of rich democracies was effectively paralysed by Donald Trump’s confrontational and inward-looking US presidency, Biden will use the G7 summit and his trip to Brussels on Monday to reassert US leadership in the democratic world as well as over transatlantic co-operation.

Johnson described his interaction with Biden as “a big breath of fresh air”. “There are a lot of things [we] want to do together,” he said, citing security, Nato and climate change.

Other topics high on the agenda of the G7 countries — the US, UK, Canada, France, Germany, Italy, Japan — include climate change, girls’ education and the economic recovery.

The group’s finance ministers have already agreed to set up a system of global corporate taxation, although details have yet to be fully agreed.

Johnson is putting the fight against Covid at the heart of the summit, for which G7 leaders will gather on Friday for their first face-to-face meeting for more than a year at the boutique Carbis Bay hotel.

“It’s the first time for ages they will all get along,” said one British official. The meeting will include a Saturday night beach barbecue of locally caught Newlyn lobster and Cornish sparkling wine.

Johnson, the summit host, will ask G7 leaders to encourage pharmaceutical companies to adopt the Oxford AstraZeneca model of providing vaccines on a not-for-profit basis during the pandemic.

Downing Street said that Pfizer, Moderna and Johnson & Johnson had already pledged to share 1.3bn doses on a non-profit basis with developing countries.

Johnson has been heavily criticised by his own lawmakers, including former prime minister Theresa May, for cutting Britain’s aid budget from 0.7 per cent to 0.5 per cent of national income during the pandemic.

The summit will also try to agree a joint approach to fighting future pandemics, with Johnson keen to avoid what Downing Street called an “every man for himself” approach in which countries scrambled to secure vital supplies at the start of the pandemic.

Johnson has invited the leaders of Australia, India, South Africa and South Korea to attend, but British officials have tried to dial back the idea that the G7 was expanding to become an anti-China democratic group. “This is about what we are, not who we are against,” said one British official.

For Johnson the summit is a chance to put post-Brexit Britain on the world stage, but the UK’s departure from the EU continues hang over him — notably over new arrangements in Northern Ireland.

Additional reporting by Victor Mallet and David Keohane in Paris