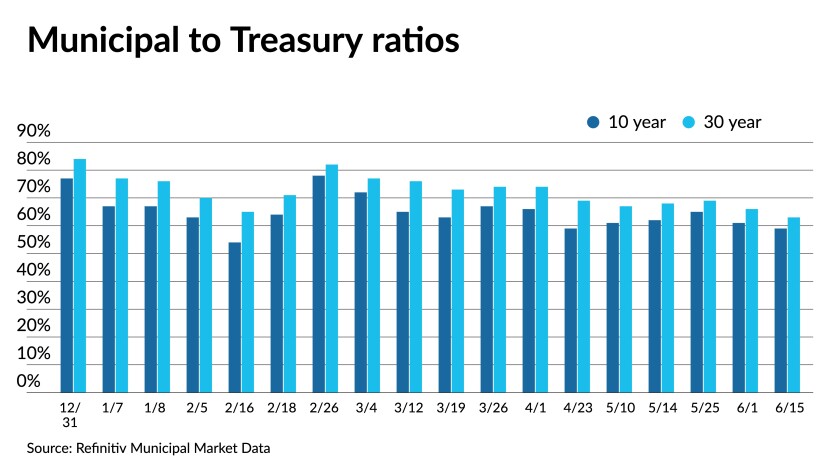 Municipals were little changed Monday as the market awaits the larger new-issue calendar and participants position themselves ahead of the Federal Reserve meeting.

After a week of U.S. Treasury strength, rates rose Monday bringing the 10-year back to 1.50% after hitting 1.43% Thursday, a three-month low. Municipals did not follow and few participants anticipate any rate volatility in the market through the summer.

“If rates remain in check, it is hard to see a near-term catalyst for a possible selloff,” according to a report from Barclays strategists Mikhail Foux, Clare Pickering and Mayur Patel.

However, municipal to UST ratios of about 60% “is not a normal state of affairs. Many investors bought in anticipation of higher taxes for both individual investors and corporations. If that does not materialize, high-quality munis will adjust to a more normal ratio regime, but, in our view, this is unlikely to happen during the summer months, when spreads will likely continue grinding tighter and yield curves continue flattening.”

The new-issue calendar kicks off with nearly $2 billion of taxable personal income tax bonds from the Dormitory Authority of the State of New York. Investors will also see several large healthcare deals, some nonrated, and two sizable taxable competitive deals from Pennsylvania and Illinois.

“Credit spreads are less than 200 basis points, and we expect further compression ahead,” Miller wrote.

FOMC preview
Most analysts expect the Federal Open Market Committee will alter its Summary of Economic Projections and perhaps begin to talk about tapering, without offering clues when they’ll begin cutting back on asset purchases.

“The Fed is in an excellent position to do nothing at its FOMC meetings this week,” said Steven Skancke, chief economic advisor at Keel Point.

Despite its repeated statements “that it has no intention to change its bond buying or interest rate policies until after it sees inflation hitting and exceeding its 2% target, and employment gains happening repeatedly for several months at a level to bring the labor market broadly back to 4% unemployment by the end of the year, financial and business markets have been looking for hints about when the Fed may actually start to telegraph a timetable for its action,” Skancke said.

But the market reaction to the consumer price index last week, he said, “confirms what the Fed already expected: there are no immediate signs of inflation problems brewing.”

Therefore, the Fed can hold off at this meeting, Skancke said.

“We are getting closer to an unavoidable monetary policy inflection point,” said Christian Scherrmann, U.S. economist at DWS Group. “The June meeting is not going to deliver a change of course immediately. The Fed has made it clear that big policy changes will come in small steps. Markets will be watching very carefully for any hint of an emerging discussion on tapering or changing Fed views on inflation.”

While some Fed officials expressed concern about rising inflation, “it seems the majority remain in the camp that judges the current inflation temporary or transitory,“ he said. “Many key measures of economic performance remain far below the ambitious goals set by the Fed, at least for now.“

The Morgan Stanley U.S. economics and global macro strategy team said it’s not time to remove accommodation, but “many FOMC participants believe it is time to provide themselves more flexibility as conditions evolve into the summer and fall.”

Stifel Chief Economist Lindsey Piegza, agreed. “While no policy adjustment is expected in June nor an announcement of a timeline for an eventual adjustment to policy, at least some Fed members will expectedly push for a discussion in the coming months regarding an eventual rollback of emergency measures.”

Joe Boyle, fixed income product manager at Hartford Funds, also doesn’t expect any clues to tapering. “[Federal Reserve Board Chair Jerome] Powell will continue to delay giving a definitive timeframe of when they will begin tapering their assets purchasing program,” he said. “I don’t expect guidance until the fourth quarter of this year or even first quarter of next year.”

Not expecting any policy changes, David Kelly, chief global strategist at JPMorgan Funds, says the Summary of Economic Projections will be the highlight of the meeting. “These numbers are in need of revision.”

The June projections showed the Fed meeting its economic goals by the end of 2023, and raising the fed funds rate the following year, he noted. “If, after reassessing their forecasts for the economy … the Fed maintains this extraordinarily dovish stance, then the risk of a boom-bust recession will have increased to a substantial degree.”

Not expecting major changes, the economics team at Wells Fargo Securities said “a few Fed officials could very well pull forward projections for when interest rates are likely to rise.”

Greg McBride, chief financial analyst at Bankrate, noted in the previous SEP, 14 Fed participants saw rates staying at the zero lower bound through 2022 and 11 through 2023. “If this changes materially with the June update, it will call into question the Fed’s commitment to hold rates steady until the economy gets close to full employment.”

The only data that came out Monday, consumers see inflation of 4.0% in the next year, up from April’s 3.4% projections, the Federal Reserve Bank of New York’s survey of consumer expectations showed.

Earnings growth expectations are crawling closer to pre-pandemic levels at the one-year mark, as it gained to 2.5%.

“The increase at both horizons is particularly pronounced among respondents age 60 and over and among those with a high school degree or less,” the Fed said.

In the short-term sector, JPMorgan will price Riverside County, Calif.’s (NR/SP1+/F1+/) $340 million of tax and revenue anticipation notes on Tuesday.

The Yamhill County Hospital Authority (////) is set to price on Wednesday $132.6 million of revenue and refunding bonds. Ziegler is head underwriter.

In the competitive arena, the South Carolina Transportation Infrastructure Bank is selling $395.09 million of revenue refunding bonds in two offerings on Tuesday consisting of $340.18 million of Series 2021B bonds and $54.91 million of Series 2021A bonds. PFM Financial Advisors is the financial advisor; Burr Forman McNair is the bond counsel.

The University of Illinois is set to sell $137.48 million of taxable facility systems revenue bonds at 11:30 a.m. eastern.