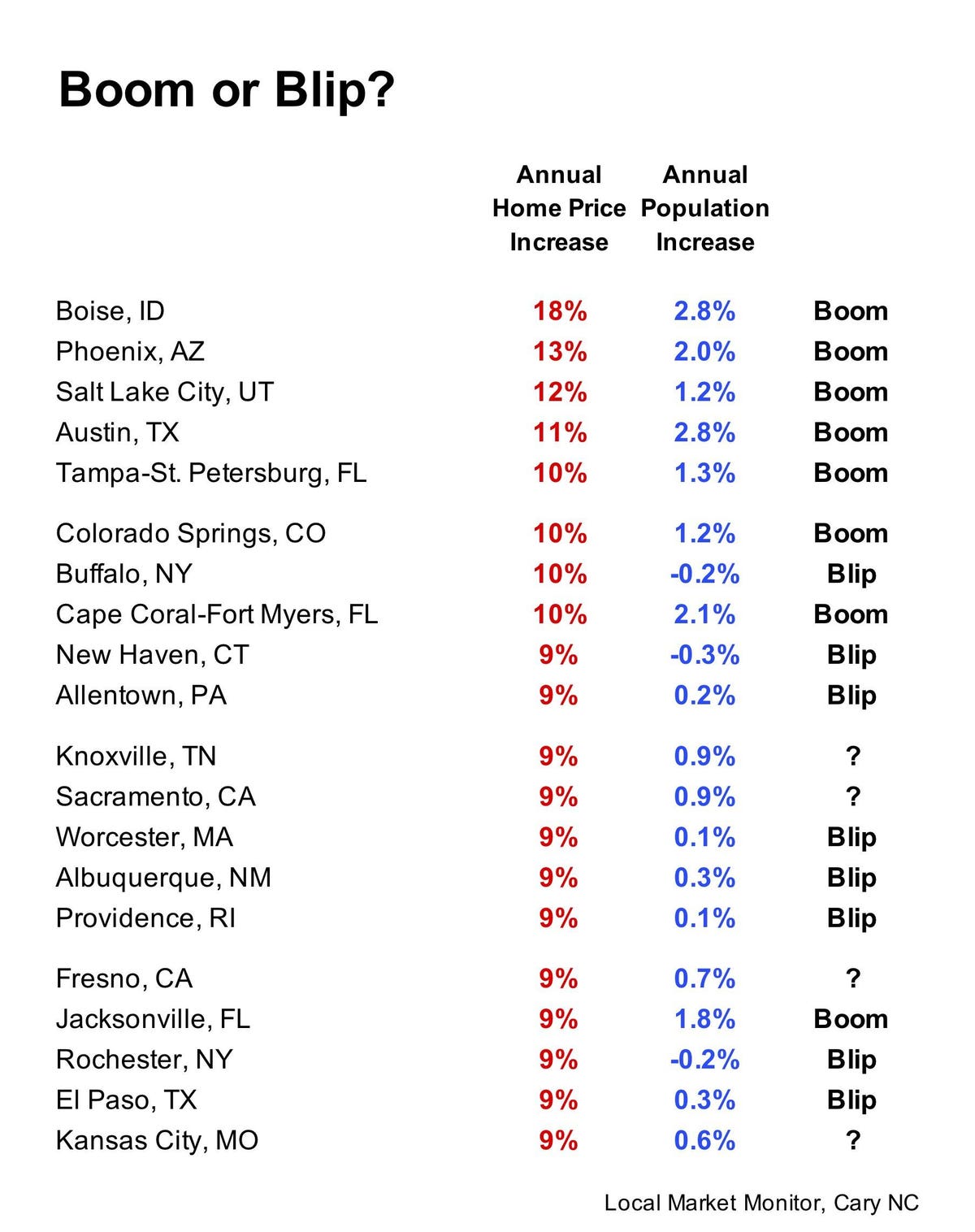 In the past year, home prices rose 10 percent in Tampa, 12 percent in Salt Lake City and 18 percent in Boise.

That’s not supposed to happen during a recession. In the first year of the previous recession – in 2008 – the only big market with a gain in prices was Houston, where they rose 3 percent.

Some analysts (me) thought prices in 2020 and 2021 would rise only slightly because of the great uncertainty about people’s financial future.

So, what’s happening? And of more importance, what should we now expect over the next year? Will prices continue to rocket upwards? Must you make an investment right now, before it’s priced out of reach?

To get some perspective, let’s examine plausible reasons why home prices could rise so much at this particular time, with the US economy still in the red.

The California Effect. We’ve seen this before: after a long period of prosperity and a run-up in home prices, the California economy goes into a slump and people leave the state. They go to Portland, Boise, Denver, Salt Lake City, Phoenix, Albuquerque and Texas; and they go with a big chunk of home equity in their pocket. So when they get to Boise they think nothing of paying half-a-million dollars for a home.

Pre-Pandemic Growth. Before the pandemic a dozen big markets added jobs to their economy at a rate of more than three percent a year, including Boise, Austin, Phoenix, Dallas, Raleigh and Salt Lake City. Even a pause in growth doesn’t catch up with such high demand for housing.

Ultra-Low Interest Rates. Mortgage rates under three percent not only encourage home buying – they virtually demand that investors consider buying property – whether a rental, a second home or just a house sitting empty for a while – because the returns on similarly-safe investments like bonds or CDs are close to zero.

Pandemic Effects. It’s unjust, but lower-paid workers have been hit harder by job losses than those with higher pay and greater wealth – those who can afford to buy homes. Also, the pandemic has encouraged people to re-locate out of crowded city centers. On the other hand, a lot of people who might ordinarily have moved – Americans usually do – decided to hunker down and stay put; so there have been fewer homes to buy.

That this last phenomenon plays a bigger role right now is hinted at by the big price hikes in such unlikely places as Buffalo, New Haven and Allentown, where jobs and population have stagnated for years. Typically about 5 percent of the homes in a market are sold every year, not a lot; so even weak demand will quickly jack up prices if nobody wants to sell.

That doesn’t explain higher prices in Boise but it does allow us to predict where prices will probably keep going higher, and where the recent sharp increases are temporary.

If limited supply has been a major factor in higher prices, what will happen as the pandemic recedes and ‘normal’ behavior returns? Yes, more supply but also more demand. I’m guessing that the normal balance between supply and demand also returns when it’s not just well-off people driving demand. Boom markets will go higher, blip markets will level out. (Yes, I know, I was wrong about 2020…)

Our table shows 20 markets where home prices were at least 9 percent higher in the past year. Based on recent population growth I’ve classified them as booms, where prices will keep rising briskly in the next year – or blips, where prices may still increase but much more moderately. And some markets are in-between.

Just a last word about the boom markets: Boise is already dangerously over-priced, at some point a bust will follow. Phoenix and Tampa aren’t that risky yet but could be soon.

The important advice for investors in boom markets is that they should not factor expected equity gains into their return calculations; be sure the income stream from rents provides the return you need. If it doesn’t, you’re speculating more than you probably want to.