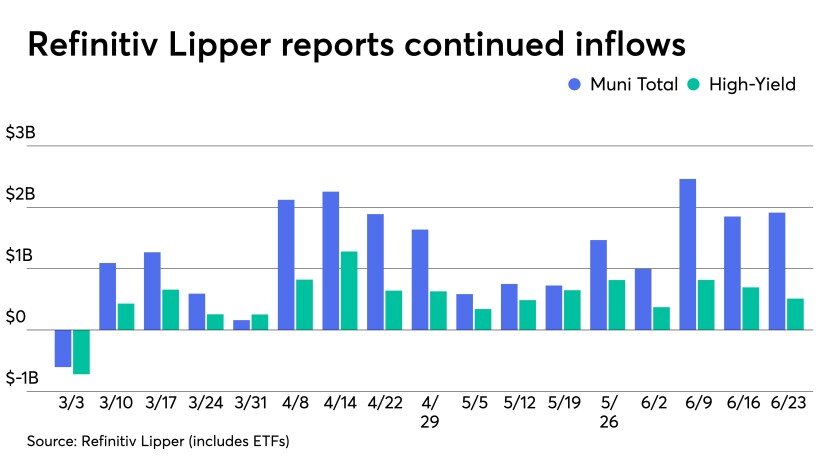 Municipals were little changed Thursday as the final new issues of the week priced with some bumps in repricings while U.S. Treasuries held steady. Refinitiv Lipper reported nearly $2 billion of inflows into municipal bond mutual funds.

Fund flows continue to pour into municipal bond mutual funds, making up at least a quarter of the market’s holdings. Refinitiv Lipper reported $1.913 billion came into funds with $511.681 million of that high-yield.

“Fund flows are certainly contributing to the strength in the market,” a New York strategist said. “It’s hard to ignore 16 weeks of consistent inflows and high-yield in particular is crushing it. If some investors want higher yields, and for sure we’ve seen some movement higher in the last week, it is still hard to imagine this market making moves like we saw in February any time soon.”

The late-February into March correction saw muni yields rise 40-plus basis points. The 10-year hit a low of 0.66% in early February and a high in April of 1.12%.

“If you think about the prospects of recovery in early March, COVID vaccines were still not readily available to the general public and cities were still shut down. How investors can look at the current fundamentals and say munis are too rich is hard” to see, the strategist said.

“Ratios are better than they were to start the month, but I don’t see them moving to anywhere near historical levels at the current moment,” he said.

Economy
Thursday’s economic indicators suggest the economy is “headed in the right direction,” but not improving enough to force the Federal Reserve to remove accommodation so quickly.

“There is no rush to remove the punchbowl of stimulus as jobless claims are still elevated and durable goods data suggests manufacturing is still working its way through bottlenecks and supply shortages,” according to Ed Moya, senior market analyst for the Americas at OANDA.

Excluding transportation, new orders grew 0.3% in May after a 1.7% increase a month earlier and excluding defense, new orders gained 1.7% following a 0.5% April gain.

Economists polled by IFR Markets surveyed anticipated a gain of 2.7% in May for the headline number, and a 0.7% rise excluding transportation.

“Durable goods data in May showed smaller-than-expected increases, but when combined with upward revisions to April, the underlying trend still looks good,” Moya said. “Boeing is bouncing back, but supply shortages are still a big issue.”

Separately, Initial jobless claims slipped to 411,000 on a seasonally adjusted annual basis in the week ended June 19 from a revised 418,000 in the prior week, originally reported at 412,000.

Economists expected 380,000 claims in the week.

This marks the lowest number for continuing claims since the week ended March 21, 2020, when it was 3.094 million.

“Layoff activity has largely normalized as employers try to retain the staff they have, amid anecdotal reports of working shortages,” Ruesterholz said. “The labor market differs dramatically by region, which is why many employers complain of difficulty finding workers.”

With most states fully open, “laggard states should more meaningfully catch up in coming months, buoying the national unemployment picture,” he said. “The fact that many states have recovered so strongly already is an encouraging sign, suggesting that scarring will be limited and the U.S. can return to full employment before the end of next year.”

In other data, gross domestic product climbed 6.4% on a seasonally adjusted annual basis in the final first quarter read, unchanged from the preliminary report. In the fourth quarter of 2020, GDP gained 4.3%.

Economists surveyed had expected the gain would remain 6.4%.

Personal consumption expenditures rose 3.7% in the first quarter, the same as the preliminary read. PCE in the Q4 2020 rose 1.5%. Core PCE, which excludes food and energy, increased an unrevised 2.5%, after a 1.3% rise in the prior quarter.

“With the decline in inventories slowing and exports likely to increase later this year as the global economy recovers, that should be a tailwind for growth,” Ruesterholz said.

The 6.4% increase, while most states restricted certain gatherings and activities, he said, “was a very solid” start to the year, and it should only get better, “given reopening and additional fiscal stimulus during the summer.”

With GDP growth over 7% forecast by Insight, the economy is “on track to eclipse its pre-COVID trend by mid-2022.”

The composite index gained to 27 in June from 26 in May.

The number of employees index climbed to 26 from 20. Prices received for finished product index slipped to 48 from 51, while prices paid for raw materials fell to 79 from 86.

Volume of new orders index decreased to 22 from 35, while backlog of orders rose to 29 from 25.

“The headline beat estimates and is the second strongest reading in the survey’s history,” said Ruesterholz. Expectations were at record level, he said, “which speaks to how optimistic manufacturers are that the current economic momentum can persist into 2022.”