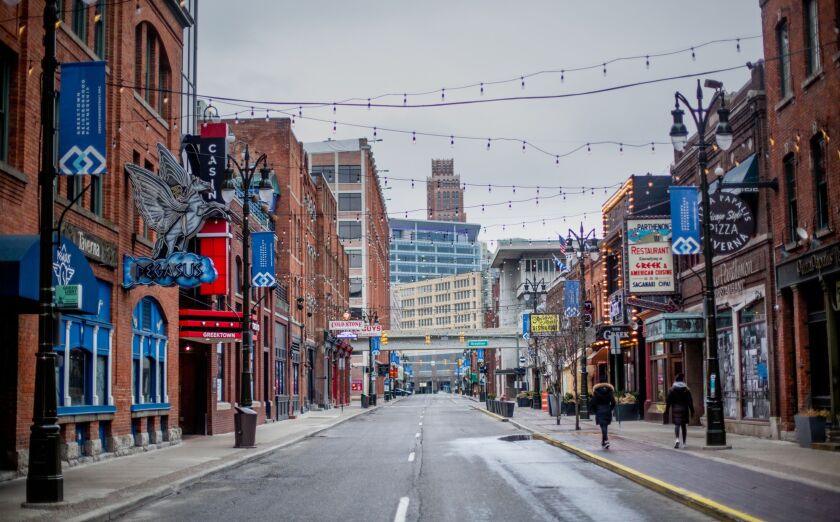 The Detroit Financial Review Commission granted another one-year waiver at its meeting Monday. The commission was put in place after the city’s December 2014 exit from Chapter 9 to monitor compliance with the plan of adjustment and provide oversight of the city’s financial and operational activities.

“Based upon a review of the city’s financial information, submitted reports and discussions during the finance and contracts subcommittee meetings, staff recommends the Financial Review Commission certify that the city of Detroit has met the statutory conditions” to “grant the city of Detroit the year-four waiver,” commission documents say.

The waiver continues through June 30, 2022. Until then the commission’s role is limited to monitoring the city’s compliance. The commission remains in place for at least 13 years post-bankruptcy.

The commission first released the city from direct oversight in 2018 after it met required targets laid out in statute. The city’s current fiscal condition is holding steady with a balanced $2.3 billion budget that includes a $1.1 billion general fund for the fiscal year that begins July 1.

To maintain independence the city must show the use of revenue projections from an estimating conference, adopt and maintain a deficit-free budget for at least three years, adopt a four-year financial plan, and a certification from the state treasurer and city’s chief financial officer of the city’s market access is required. The city’s Retirement Protection Fund and legacy costs are also reviewed and the city must maintain a rainy day fund equal to at least 5% of recurring expenses.

The latest waiver represents a notable feat for the city given that at the start of the COVID-19 pandemic in the spring of 2020 the city eyed a $400 million deficit across fiscal 2021 and 2022 that threatened its continued independence as budgets must remain balanced. The city eliminated the red ink through cuts and a draw on reserves and revenues have since picked up.

“The FRC, within its statutory role, monitored the city’s key financial reports and verified, among other metrics, that the city, in its comprehensive response the pandemic, maintained an operating surplus, made all scheduled debt obligations and pension payments, and provided essential services to its residents,” commission reports say.

The city projects general fund revenues will increase by 18.1% in fiscal 2022 due to gains in the wagering tax based on pre-COVID-19 baseline casino revenue collections as well as stabilized income tax collections.

The city projects general fund revenue growth of 5.1% in fiscal 2023 “as peak pandemic effects on nonresident remote work and casinos wear off,” documents report. Modest growth of 1.5% in fiscal 2024 and 2025 is expected and the city forecast hitting its pre-pandemic revenue peak of $1.06 billion from 2019 in 2024.

“The city did not include in its forecast revenues from on-line gaming nor the anticipated $826 million from the American Rescue Plan Act of 2021,” according to commission documents.

State Treasurer Rachel Eubanks and Detroit Chief Financial Officer Jay Rising certified their belief there’s a substantial likelihood that municipal securities or debt obligations can be sold by the city in the current and next fiscal year.

The city issued $80 million of general obligation debt last October for public safety, recreation and transportation projects, marking its second stand-alone deal to sell without support since emerging from bankruptcy. The city returned in February with a $175 million stand-alone GO issue under a $250 million blight removal bond program approved by voters last November.

The city has won a series of upgrades since emerging from Chapter 9 but its ratings remain speculative grade. Ahead of a recent $175 million general obligation sale for blight removal, S&P returned the outlook on its BB-minus rating to stable from negative. Moody’s Investors Service rates the city Ba3 with a positive outlook.

The city’s Retirement Protection Fund, known as the RFP, held $234 million at the end of March and the city aims to bring it up to $365 million through scheduled and supplemental annual contributions to help the city cover roughly $202 million of pension contributions that resume in 2024.

Contributions were put on hold to give the city breathing room after the bankruptcy and the special trust fund was put in place but based on current projections it will help the city only through fiscal 2027 when it is exhausted.

“The pension pressures will be a long-term budget challenge for the city,” the commission reports, as the RPF cushion is exhausted and the general fund bears the full weight of the annual contribution.

A structural imbalance occurs heading into fiscal 2027. If revenues do better than projected, a structural gap is delayed a year or two.

“One of the city’s top goals is certainly to identify additional dollars that can go into the RPF to help stretch out this ramp up” in payments and also to identify new revenue sources and expense savings so the city can “meet this pension contribution once the RPF runs out,” Steven Watson, one of the city’s deputy chief financial officers, told the commission last month.

While the need to identify more revenue to fund contributions looms large in the future, the city faces another threat in a pension fund proposal to move to a 20-year amortization schedule from the current 30-year one used to set contributions. A 20-year term would raise annual contributions to $241 million.

The city drew $50 million from reserves to help manage the pandemic’s early blows leaving the fund at 5.6% of operations, just above a statutory requirement of 5% of recurring expenses. The city is restoring the reserve to $107 million in fiscal 2022 bringing it back up to a roughly 10% level.

The commission’s vote came with little discussion, including about the threats Detroit Mayor Mike Duggan and his finance team believe are posed by proposed charter changes adopted by a voter-approved commission.

The changes currently are set to appear on the Aug. 3 ballot for voter consideration but they remain the subject of a legal battle that is now before the Michigan Supreme Court which last week set July 7 for oral arguments.

Debate over the changes took place at the DFRC’s May meeting when Detroit Charter Commission fired back at the city’s contention that the changes would drive a $2 billion deficit in the city’s four-year financial plan that could force a return to state oversight and in a worst-case-scenario a return to bankruptcy. Charter commission members accuse the city of inflating and exaggerating the costs and that most changes that carry a price tag are suggestions, not mandates.

A review of the charter revisions by Michigan Attorney General Dana Nessel raised a series of concerns about the legality of some provisions that could run afoul of the bankruptcy exit plan and the potential for a fiscal crisis could be triggered, prompting Gov. Gretchen Whitmer’s rejection in an April 30 letter to the charter commission. If the measures make it to the ballot and are approved they would go into effect in 2022.

The dispute over the charter revisions landed in the courts last month after the review commission approved the ballot question May 6 and sent it to the city clerk to meet a May 11 deadline. The vote followed Whitmer’s April 30 letter to the charter commission declining to approve the revisions.

Two lawsuits were filed contesting the Detroit City Clerk’s certification to put the questions to voters. The litigation argued without the governor’s approval Proposition P would violate the Home Rule City Act because it requires the governor’s review and approval — a position city attorneys had also taken in a discussion with city council members.

A Wayne County circuit court judge agreed with that position. The Michigan Supreme Court agreed earlier this month to the Detroit Charter Review Commission’s request that it take up the question after an appellate court upheld the circuit court decision removing Proposition P from the ballot.

The justices also stayed the lower court decision as they consider the legality of the ballot measure and so the question remains on the ballot for now.

The charter was last revised in 2012. It establishes the ground rules for government operations, details the roles of the executive and legislative branch, enables the election process and mandates the departments, programs and services the city must provide.

The nine-member Charter Revision Commission was authorized in a 2018 referendum and must disband three years after its Aug. 6, 2018 creation so the Aug. 3 ballot is its last chance to put revisions to a public vote.