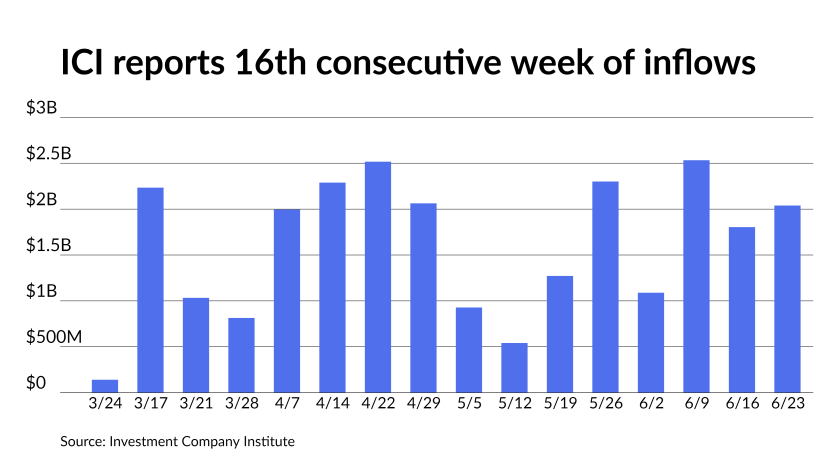 Municipals were stronger Wednesday as the New York City Municipal Water Finance Authority deal was offered to institutions who gave it a warm reception.

Yields on high-grade munis fell by as much as two basis points while demand for paper was stronger than ever at the end of the first half and at the beginning of one of the largest reinvestment periods of the year.

Municipal-to-UST ratios held near recent levels, at 68% in 10-years and 73% in 30-years, according to Refinitiv Municipal Market Data. ICE Data Services had the 10-year muni-to-Treasury ratio at 68% and the 30-year at 72%.

Municipal bond funds saw $2.039 billion of inflows in the latest week, according to the Investment Company Institute, the 16th week in a row the mutual funds saw cash flowing into them.

The buyside was busy on Wednesday, bustling for paper before Thursday’s arrival of the July 1 reinvestment date — typically one of the largest times for coupon, maturity and redemption payments besides Dec. 1.

Municipals held a firm tone as supply constraints continued to sustain strong demand for new issues as the market prepared for heavy redemptions and the June employment report later in the week, according to John Farawell, executive vice president and manager at Roosevelt & Cross.

He said the New York City water deal was an example of the strength of current demand as it was oversubscribed in the backdrop of a firm market and a dearth of supply.

“Even during COVID, it was one of the best credits in New York,” he said. “It’s an essential service bond and a top credit in New York City.”

Overall, he said activity was firm and positive — yet some cautiousness prevailed — ahead of the start of the second quarter, July 1 redemptions, and June’s non-farm payroll report due out on Friday.

“It’s keeping the market firm and the demand for bonds high,” Farewell said Wednesday, noting that the municipal market is bullish even though inflation and tapering may be in the economic forecast ahead.

“But it’s a wait and see and people are sitting tight because they don’t know what to expect” from Friday’s employment numbers, he said.

“July 1 is a big redemption between bonds coming due and interest being made,” he said. “There is an overabundance of money to be put to use.”

Supply will remain light next week, according to Farawell, especially with the arrival of the July 4th holiday, which will be observed on Monday.

Others agreed that the tone and climate of the market is supportive for the start of the second half.

“The approximately $50 billion in inflows so far this year and the large amount of reinvestment demand has been a strong support for the municipal market for the first half,” said Roberto Roffo, managing director and portfolio manager at SWBC Investment Co.

He agreed that the NYC water deal was received well by institutional investors, with a few bumps in yield along the maturity curve.

“The market is going to finish up the first half on a strong note with prices rising a couple of basis points and demand seeming somewhat insatiable — even with the rich valuations of munis versus Treasuries,” Roffo said.

The second half of the year is expected to be more of the same as investors seek tax havens due to the constant talk of rising taxes and the continued demand-supply imbalance of the market, according to Roffo.

The bonds are insured under the Oregon School Bond Guaranty Act.

Piper Sandler was the financial advisor; Hawkins Delafield was the bond counsel.

It marked the 16th straight week that the funds saw inflows. In the previous week, muni funds saw an inflow of $1.804 billion.

On Thursday, Refinitiv Lipper will release data from the weekly reporting muni funds for the week ended June 30.

The average seven-day simple yield for the 162 tax-free and municipal money-market funds remained at 0.01% from the previous week.

Taxable money-fund assets increased $3.24 billion in the week ended June 29, bringing total net assets to $4.395 trillion. The average, seven-day simple yield for the 764 taxable reporting funds remained at 0.01% from the prior week.

The triple-A benchmark scales were stronger trading on Wednesday.

In late trading, Treasuries were stronger while equities were mixed.

All eyes on employment
With the Federal Reserve more concerned about employment than inflation at this point, Friday’s June jobs report may provide answers to the market’s questions.

On Wednesday, the ADP employment report surprised to the upside, and while the two reports can’t be compared, it may suggest “a sound private non-farm payrolls print on Friday,” said Christian Scherrmann, U.S. economist at DWS Group.

“After a period of greater-than-expected data distortion, it does seem like the difference between the two reports is now converging back toward normal error ranges — potentially increasing the value of this report as a signpost significantly.”

Economists polled by IFR Markets expected 600,000 jobs to be added.

“Below the good headline number, some of the detail in the ADP report does look encouraging,” Scherrmann said. “In particular it shows that small- and medium-sized companies have accelerated their hiring in recent months,” and the leisure and hospitality sector added 332,000 jobs.

“This looks like a sign that the normalization process and recovery in the labor market is progressing,” he said. The growth should hold its momentum, “as extended unemployment benefits fade out in the course of the year,” Scherrmann noted, and more vaccinations allow “a safe return to work.”

And the jobs were spread almost evenly across all sized companies, he said. “Despite the addition of over 3 million jobs so far this year, private sector employment is still 6.8 million below the February 2020 peak, suggesting the labor market recovery will lag the broader economic recovery.”

Anderson said given the ADP report, Bank of the West’s expectation of 580,000 new jobs in the nonfarm payrolls report “might end up being on the low side.”

Additionally, as a result of COVID, seasonal adjustment factors may be skewed and could cause headline nonfarm payroll numbers to be misstated, according to a report by Wells Fargo economists, led by Azhar Iqbal.

Using their own calculations, the researchers determined, the numbers for June, July and August could be boosted by seasonal adjustment.

They found the January to April numbers were lowered by seasonal factors and May’s were lifted by 125,000.

Also released Wednesday, pending home sales climbed 8.0% to 114.7 in May after falling 4.4% in April. The reading was the highest posted in May since 2005, according to the National Association of Realtors.

“May’s strong increase in transactions — following April’s decline, as well as a sudden erosion in home affordability — was indeed a surprise,” said NAR Chief Economist Lawrence Yun. “The housing market is attracting buyers due to the decline in mortgage rates, which fell below 3%, and from an uptick in listings.”

Separately, the Chicago Business Barometer dropped to 66.1 in June from 75.2 in May.

For the second quarter, the index was 71.1, its highest since the final quarter of 1973.

Of the five main categories only supplier deliveries gained in the month, and order backlogs posted the biggest drop. Employment fell to its lowest point since January, with companies having trouble hiring.

Prices paid jumped to its highest read since December 1979, with firms reporting price hikes as a result of material shortages.

Also reported Wednesday, the Midwest economy was little changed in the month, with the Federal Reserve Bank of Chicago’s Midwest Economy Index rising to 0.69 in May from 0.63 in April. Relative MEI rose to 0.79 from 0.47.