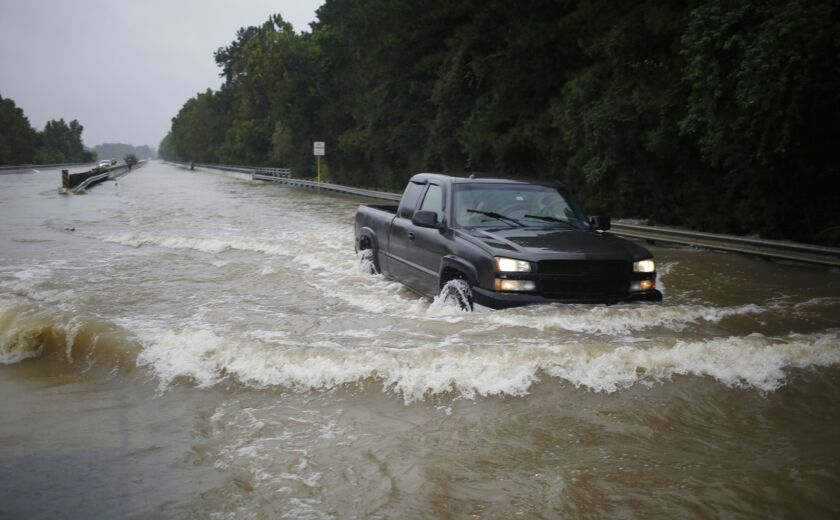 Texas’ largest county is shoring up its faltering $2.5 billion flood control bond program with a new trust fund after discovering a shortfall in federal support.

In a marathon meeting last week, the Harris County Commissioners approved creation of the Flood Resilience Trust to assure that all 2018 bond projects will be built without delays due to funding.

Commissioners also directed staff and a newly created county administrator to transfer an estimated $40 million per year from the Harris County Toll Road Authority to the Flood Resiliency Trust.

With a population of nearly 4.8 million in a coastal area prone to flooding, Harris County won approval of $2.5 billion of bonds for flood control in 2018, one year to the day after Hurricane Harvey made landfall, claiming more than 100 lives and wreaking $125 billion of damage.

Since the early 1980s, Harris County has invested almost $5 billion in new toll road construction compared to roughly $2.5 billion in flood control projects, according to a report from the Harris County Budget Management Department.

“As the county has developed, our flooding situation has worsened, and the county now requires greater and more certain resources to fund its priorities for flood control,” the report noted.

County Judge Lina Hidalgo and the four commissioners unanimously approved the plan that provides a backup for funding under a ranking of bond priorities, but only when needed due to lack of funding expected from state and federal sources.

Voters approved the $2.5 billion of bonds, the largest authorization in the county’s history, with the understanding that the bonds would raise money to match mostly federal grants. With the matching money, the list of projects planned comes to $5 billion.

“To date, no project has been delayed because of lack of funding,” said Alan Black, who was named interim director of operations for the district at the June 29 meeting.

However, Black said the amount of state and federal funding expected has fallen short of expectations by about $1 billion.

The flood control district had expected $1 billion from the Department of Housing and Urban Development for mitigation projects.

However, under a new process, the funding has to go through the Texas General Land Office, headed by George P. Bush, nephew of former president George W. Bush.

Bush withheld revenues for the county and decided to make 49 counties eligible for the federal funding while establishing a cap of $200 million for Harris County.

Bush has announced he will challenge Texas Attorney General Ken Paxton in the Republican primary for that position.

“The Flood Control District will continue to aggressively pursue partnership funding,” Black said. “Establishing the Flood Resilience Trust using funds already approved by Court, coupled with additional annual contributions, provides certainty that our projects will be completed in an equitable way, even when we are unable to secure funding from partners.”

Black and others made the case that the transportation and flood control funding are related issues in the county, where runoff from toll roads contributes to high water and rapid evacuation is often necessary.

Toll funds or money from the Texas Department of Transportation deposited in the Flood Resilience Trust must only be used on projects with a “clear nexus to mobility,” Black told commissioners.

By reducing flooding, county residents can quickly access supplies for recovery and get back to their jobs sooner, Black said.

“We are recommending annual mobility transfers totaling around $343 million by FY 2030,” Black said. The transfers and other funding would create a trust fund of $830 million by 2030, he said.

“Right now, before starting the mobility transfers, we’re at $489 million,” he said.

Since the 10-year bond program’s passage, the Flood Control District has found more than $1 billion in partnership funding and launched 160 of the 181 projects identified in the program, covering all of the county’s 23 watersheds.

“We discussed the possibility of a bond rating downgrade,” Garcia said.

“I’m going to need some assurance that we will do everything we can to avoid that, and I want to know who will take responsibility if it happens,” Garcia said.

“As the budget director, the buck stops here,” said David Berry, the county’s budget director who was named to the newly created position of county administrator at the meeting.

“Did I promise a downgrade would absolutely never happen?” Berry said. “No. The whole revenue could decline. There are factors we don’t control. Will we be stewards of it and communicate and collaborate with the toll road authority so they have the money they need to plan and maintain their system? Absolutely. Hold me accountable.”

The discussion came as the county prepared to issue $307 million of bonds to replace commercial paper for the flood control district, along with $90 million of other county road refunding bonds.

The flood control bonds are expected to price July 21, with the road bonds coming Aug. 4.

S&P Global Ratings has an AA-minus rating on the toll road authority’s debt. S&P returned the outlook to stable from negative on April 22, along with 125 other transportation-related credits as the threat of long-term loss of revenue because of the coronavirus pandemic began to ease.

The county expects $914 million in American Rescue Plan Act aid, according to Fitch. About $458 million came in May, and the rest is expected in 2022.

General fund operations generated a net operating surplus of $181 million or roughly 8% of spending, boosting unrestricted general fund reserves to $1.5 billion or 65% of spending as of Feb. 29, Moses said.

In addition to the flood control and toll road authorities, the county operates a public health system and the seaports in Houston.

In naming David Berry the new county administrator, County Judge Lina Hidalgo cited the complexity of operating the massive operations and said the shortfall of the matching funds for the flood control district was a prime example.

At the flood control district, Black was named to replace Russ Poppe as executive director after Poppe resigned June 11.

Poppe, 45, said Hurricane Harvey in 2017 and the passage of the $2.5 billion flood bond program the following year added immense pressure to the job.

“While I greatly appreciate your continued support for making Harris County more resilient with natural disaster, the growing expectations associated with these efforts have adversely affected the quality of my personal life to a point I can no longer sustain,” Poppe wrote to commissioners.

Commissioners unanimously voted to appoint Black as the district’s interim executive director as of last week. The court also directed county officials to launch a national search to hire a permanent executive director.

Local property taxes, which accounted for 80% of the county’s general fund revenues in fiscal 2020, were not significantly affected by the pandemic and held relatively stable while the county saw its largest revenue loss in charges for services at nearly $30 million, according to Fitch.